Achieve a higher, straighter, and more defined nose without surgery!

Have you ever wanted a higher, straighter and more defined nose but are afraid of going under the knife? The Ultra V Hiko Nose Thread Lift is for you!

Now you no longer have to go for invasive nose implant surgery or do filler augmentations to get a straighter and more defined nose bridge. Chique’s Ultra V Hiko Nose Thread Lift can improve your nose contours and enhance its shape without surgery!

This non-invasive nose thread lift procedure is gaining in popularity around the world with the following advantages over Nose Fillers:

With a much lesser downtime and lower price point, the Ultra V Hiko Nose Thread Lift also comes without the risks of filler treatments which can potentially cause lump formation, allergic reaction, vascular complications and more.

The Ultra V Hiko Nose Thread Lift is a non-surgical & minimally invasive procedure with almost no down time so you can obtain a higher, more defined nose & nose tip without having to undergo invasive implant surgery.

How does it work?

The nose can be augmented through a procedure that uses PDO (polydixanone) threads to be placed under the skin, which have been scientifically proven to be fully bio-compatible and absorbed by the body. As the threads dissolve, they stimulate the production of collagen and tissue fibroblasts, which helps to elevate the nose bridge and tip to enhance and support the nose’s contour and definition.

The threads provide a scaffolding effect which immediately helps to lift, contour and shape the nose as desired without undergoing a surgical procedure. The produced collagen will also help to support the new shape of the nose for a longer period of time.

All it takes is 15 minutes

The procedure is simple and only takes 15 minutes to complete. At Chique, we place the utmost priority for your care and comfort, hence numbing cream and local anaesthesia is administered to make the procedure relatively painless!

If you’ve ever wanted a more defined nose profile without the costly price and invasive nature of nose implant surgery or the potential risks of a Nose Filler, then the Ultra V Hiko Nose Thread lift is for you. Consult with us to achieve your ideal nose profile.

What is PDO Thread Lift Technology? 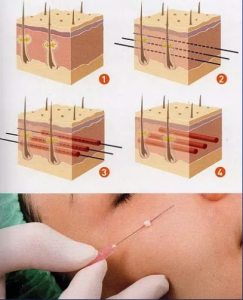 PDO Thread Lift is a revolutionary non-surgical skin tightening technology that utilises fine threads called polydioxanone (PDO). These threads are inserted via needles into targeted areas under the skin to provide skin lifting, stimulate cellular renewal and support skin tightening. A tightening effect is achieved from the inside out, as the skin cells are stimulated to create collagen and new tissue fibroblasts.

PDO is an ultra-thin (0.12mm) synthetic absorbable monofilament thread which is commonly used in fine ligatures and cardiovascular surgery. Due to its super thin nature, this treatment is much more comfortable and relatively painless.

The PDO threads are very versatile and can be used to heighten and elevate the nose bridge and tip, giving it a very naturally lifted look. PDO threads can also be used to enhance the nose tip as well, giving a more pointed and heightened look that cannot be achieved by dermal filler injection. The results are long lasting with a natural-looking nose! After about 6 months, the PDO threads are naturally and safely absorbed into the body.

Will it produce sufficient results?

One of the concerns for such a simple procedure is – would it be sufficient to achieve a satisfactory result? Some Nose Thread Lift procedures do not seem to deliver results which are sufficient, so what is the problem?

The results are based on a variety of factors including:

Chique clinicians are properly trained and experienced in providing the desired outcome greatly maximising the scaffolding, lifting and contouring effect of your nose with the most optimal results!

Are There Any Possible Side Effects?

The risks of side effects are very little and there is almost no downtime as well, as the procedure is relatively simple and non-invasive, requiring a single injection site at the tip of the nose only! Whereas some discomfort is expected the following week, it usually resolves within 2 weeks. There is also a very low risk of infection, as with any implantation procedure, however at Chique, sterility during the procedure is of utmost importance. We will also advise clients not to use any makeup or facial products on the treated area until after at least 3 hours after the procedure.

How Long Does The Procedure Last?

The effects are expected to last between 1 – 2 years. Also note that there is a partial effect that is semi-permanent. As the threads create new collagen upon dissolving, it tightens the skin.

Is The Procedure Suitable For Men Too?

Yes! The procedure is suitable for men as well. As males tend to be bigger in build, the number of threads required may be more in order to achieve the desired results. In order to give a higher and more defined result, it can also be done in conjunction with Nose Fillers.